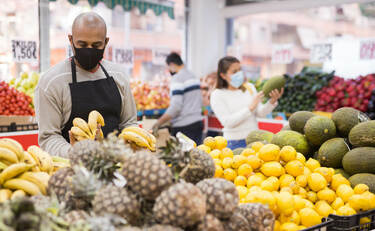 On February 23, 2021, the Los Angeles County Board of Supervisors voted 4-1 to institute a $5 per hour “Hero Pay” increase for frontline grocery workers and drug retailers in unincorporated areas of Los Angeles County. The increase is effective immediately and will remain in effect for 120 days. The ordinance will increase pay for approximately 2,500 grocery workers in these unincorporated areas of the County.

The motion was co-sponsored by Supervisors Hilda Solis and Holly Mitchell. The motion states: “Frontline grocery and drug retail workers have been met with COVID-19 exposures and outbreaks in their place of work. The inability to practice social distancing consistently at work due to large crowds has not only increased exposure risks but also contributed to the psychological distress workers have felt during the pandemic, with research finding that employees with direct customer exposure were five times more likely to test positive for the virus.”

The ordinance establishes hazard pay requirements for employees at grocery retail and drug retail establishments in the unincorporated areas of the County of Los Angeles.  Companies within the unincorporated areas of the county fall under this ordinance if they are publicly traded or have at least 300 employees nationwide, as well as more than 10 employees per store site. The ordinance also establishes fines for violations of the hazard pay ordinance, provides a private right of action for employees and authorizes administrative action against non-compliant stores.

Because the ordinance is an urgency measure, it takes immediate effect upon the Board’s vote and will remain in place for 120 days. Businesses have a 45-day grace period to begin paying the increased wages but Hero Pay begins accruing on the effective date of the ordinance.

Last month, the Board first voted to consider the issue, and requested an ordinance be drafted and an analysis prepared by County Counsel.

The City of Los Angeles is separately considering a similar hazard pay measure for grocery store workers, which would impact a greater number of workers. The City Council voted unanimously, 15-0, to consider the ordinance and requested an analysis report. The City’s Chief Legislative Analyst report, submitted on February 19, 2021, raised some concerns about the economic sustainability of the measure for the City. The report found that “the grocery industry is a low profit margin industry” and “companies in this sector achieve success through the substantial volume of goods they sell.” The report noted that the $5/hour increase could have a significant impact on some associated retailers. If the City’s measure is passed, it would increase pay for approximately 26,000 grocery workers.

Other Southern California cities, including Long Beach, Santa Monica and West Hollywood, have enacted similar “Hero Pay” ordinances. In response, some grocery chains have shut down locations in these areas.