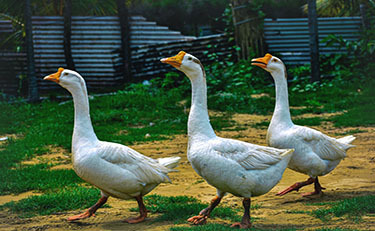 On May 6, 2022, a panel of three judges in the Court of Appeals for the Ninth Circuit considered a challenge to California’s ban on foie gras. The law has been heavily litigated for nine years, including three sets of appeals before the Ninth Circuit.

The panel ruled 2-1 that the foie gras ban was not preempted by federal law and did not violate the dormant Commerce Clause.

California Health and Safety Code §25982 provides that “[a] product may not be sold in California if it is the result of force feeding a bird for the purpose of enlarging the bird’s liver beyond normal size.”  The law was originally passed by the California legislature in 2004 with a 7.5-year enforcement delay.

Two of the three judges on the panel held that the ban was neither a command to market non-force-fed products as foie gras nor to call force-fed products something that would violate federal naming provisions. Therefore, it was not preempted by the federal Poultry Products Inspection Act (“PPIA”).

The majority also held that the ban does not violate the Commerce Clause, even though it effectively burdens only out-of-state businesses. The panel held that Plaintiffs had shown no cognizable burden on interstate commerce, and that California had an interest in public health and in preventing animal cruelty.

The panel upheld the district court’s narrowing of the ban. That court held that online, phone and fax sales to California buyers is permitted under the law when title passed outside the state. This means that California consumers may purchase foie gras for their individual use through third-party delivery companies. However, retailers and restaurants may not sell or give away foie gras.

In his dissent, Judge Vandyke argued that §25982 was preempted by the PPIA and that the lower court erroneously denied Plaintiffs’ motion to add an express preemption claim. Judge Vandyke pointed out that “California has prohibited the sale of any bird liver if that bird was force-fed, and the only way to make foie gras that complies with federal requirements is through force-feeding. This forces Plaintiffs into an impossible situation, and one in which the only solution is to stop selling any foie gras in California.”

Litigation on the ban is likely to continue, with Plaintiffs seeking en banc review of the decision.