ECJ Blogs
FTC Issues Proposed Rule for Made in USA Labeling
By Pooja S. Nair on 07.06.2020
Posted in Legal Bites 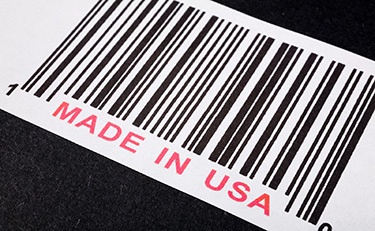 On June 22, 2020, the Federal Trade Commission issued a proposed Made in USA Rule regarding when businesses can advertise that their products are made in the U.S., and giving the agency discretion to impose civil penalties.  The proposed rule has not yet been published in the Federal Register, but the agency has invited businesses to file public comments regarding their feedback.

The Rule defines “Made in the United States” to mean “any unqualified representation, express or implied, that a product or service, or a specified component thereof, is of U.S. origin, including, but not limited to, a representation that such product or service is ‘made,’ ‘manufactured,’ ‘built,’ ‘produced,’ ‘created,’ or ‘crafted’ in the United States or in America, or any other unqualified U.S.-origin claim.”

The proposed rule and the agency’s staff report on the findings of a Made in USA workshop convened to consider consumer perception were released concurrently.  The report is available here. The report found that almost 3 in 5 Americans agree that “Made in America” means that all parts of a product, including any natural resources it contains, originated in the United States. The agency claims that “at least a significant minority of consumers are likely to be deceived by an unqualified Made in USA claim for a product incorporating more than a trivial amount of foreign content.”

In 2019, the FTC found that a number of companies, including food manufacturers, labeled products as U.S.-made when they were produced in other countries.  However, no fines were imposed.