ECJ Blogs
Can A Receiver Legally Divert Mail?
By Peter A. Davidson on 02.27.2020
Posted in Ask the Receiver 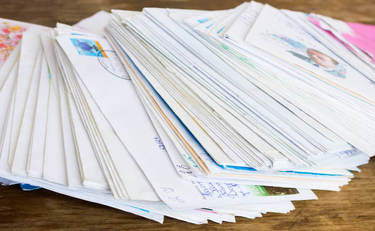 Q:  A bank obtained a judgment against me, as a result of a failed business venture. While I have a house, there is no equity above my homestead exemption. I’ve little else, although the bank’s attorney has repeatedly accused me of hiding assets and having interests in businesses and assets owned by my brother and uncle. The bank’s attorney was able to convince a judge to appoint a receiver “in aid of execution” to help the bank collect its judgment. I just found out the receiver has diverted all the mail that is delivered to my house, including not only mail addressed to me, but also mail addressed to my sick wife and my grown daughter, who still lives with me. I have complained to the receiver, who admits he delivered a change of address form to the post office to divert my mail to him. He said he is only getting my wife’s and daughter’s mail because the post office diverts all mail addressed to my house to him and does not segregate it by addressee. Can the receiver divert my mail and the mail of my non-judgment debtor wife and daughter?

A:  No. A receiver only has the right to divert mail if the receiver is the receiver of an entity or person (very rare) in which case, because the receiver controls and has the right to possess all of the entity’s assets, he or she can control the mail. The entity situation is much like who controls the attorney client privilege. Because the receiver replaces the board of directors or controlling management, the privilege is held by the receiver. SEC v. Ryan, 747 F. Supp. 2d 355 (N.D.N.Y. 2010) (Receiver appointed for company stepped into company’s shoes and became company’s attorney’s “client” entitled to assert or waive privilege); see also CFTC v. Weintraub, 471 U.S. 343 (1985); U.S. v. Plache 913 F. 2d 1375, 1381 ( 9th Cir. 1990). The same is true regarding who controls the entity’s assets, including its mail. A receiver in aid of execution is not a receiver over the judgment debtor and, therefore, can’t control its mail. Indeed, in California, a receiver in aid of execution has no greater powers than the judgment debtor in executing on or pursuing the judgment debtor’s assets. Morand v. Superior Court, 38 Cal.App. 3d 347, 350 (1974) (“Upon his appointment the receiver has no greater rights against others than the judgment creditor would have.”). As the Court explains: a receiver in aid of execution “is a creation of statute and not a remedy in equity. The receiver is not, except in a technical sense, an officer or instrumentality of the Court, but represents and is an agent of the … judgment creditor at whose instance he was appointed.” Id., In re Oak Park Calabasas Condominium Ass’n., 302 B.R. 665, 670 (Bankr. C.D. Cal. 2003) (“the receiver is an agent of the judgment creditor rather than an officer of the court”). Under California’s enforcement of judgment law, C.C.P. § 680.010 et seq., a judgment creditor is not given the power to divert a judgment debtor’s mail. Therefore, a receiver in aid of execution has no such power.

Unfortunately, some plaintiff’s attorneys (intentionally or ignorantly) sometimes take provisions from SEC receivership orders or entity receivership orders, which correctly allow a receiver to divert mail, and put those provisions in receiver in aid of execution orders and, some judges, either not knowing better or not paying attention, sign those orders with the improper provisions in them. If a receiver diverts a judgment creditor’s mail, whether on his own initiative, or even if his order so permits, the receiver is exposing himself to criminal and civil liability. Kurns v. Railroad Friction Products Corp., 132 S. Ct. 1261, 1265 (2012) (“state law is naturally preempted to the extent of any conflict with a federal statute…”); Teton Millwork Sales v. Schlossberg, 311 Fed. Appx. 145,150 (10th Cir. 2009) (“there is no immunity if the Court of the receiver acts ‘in the clear absence of all jurisdiction’” (citing cases)).

It is a federal crime to divert or seize someone’s mail. 18 U.S. Code §§ 1700 et seq. Section 1702 states, in part,: “Whoever takes any letter … which has been in any post office … before it has been delivered to the person to whom it was directed, with design … to pry into the business or secrets of another or opens … same, shall be fined … or imprisoned not more than five years, or both.” It is also conversion. Lee v. Hanley, 61, Cal. App. 4th 1225, 1240 (2015) (“Conversion is the wrongful exercise of dominion over property of another.”). If this occurs, the judgment debtor can ask the appointing court for permission to sue the receiver. If the proposed complaint asks for a jury trial, the court must give the judgment debtor permission to file suit. Jun v. Myers, 88 Cal. App. 4th 117, 125 (2001).

The fact that the receiver’s order may purport to give the receiver the authority to divert a judgment debtor’s mail does not protect the receiver, because a Superior Court does not have the power to act in violation of federal law and, as indicated, there is no provision in California law allowing a judgment creditor or receiver to take a judgment debtor’s mail. Any such provision is invalid and does not protect the receiver. The case against the receiver is even stronger, in the facts you posit, since even if the receiver had the right to divert your mail, he clearly had no right to possession of your wife’s or daughter’s mail. Once the receiver was put on notice that was happening, and he continued, he became liable for diverting their mail and they too can sue for conversion, after getting leave to do so. Indeed, leave to sue might not be necessary. In Teton Millwork Sales, supra. a receiver appointed in a divorce case, in West Virginia, who was authorized to collect assets the husband held an ownership interest in, went to Wyoming and seized the mail and assets of a corporation of which the husband was a 25% shareholder. The corporation sued the receiver in Wyoming state court. The receiver removed the lawsuit to federal court and filed a motion to dismiss, arguing that under the Barton doctrine, he could not be sued without prior permission of the court which appointed him. The district court granted the receiver motion, but the 10th Circuit reversed. It held that because the receiver’s acts were alleged to be “ultra vires,” prior permission to sue was not required. It cited language from the Barton decision which states: “if, by mistake or wrongfully, the receiver takes possession of property belonging to another; such person may bring suit therefore against him personally as a matter of right; for in such case the receiver would be acting “ultra vires.” Id. at 148 citing Barton v. Barbor, 104 U.S. 126, 134 (1881). The court held, taking the corporation’s mail and assets, when the husband only had a 25% interest, and the corporate veil had not been pierced, was improper and ultra vires. It also held the receiver had no authority to act in Wyoming, because he never commenced ancillary proceedings there. As a result, the corporation, which was not a party to the divorce proceeding, could sue the receiver without obtaining prior court approval. Accord, In re DMVV Marine, LLC, 509 B.R. 497, 506 (Bankr. E. D. Pa. 2014) (“The classic application of the ‘ultra vires’ exception is the case of an action against a receiver who seizes or otherwise attempts to administer property that is not receivership property, but that actually belongs to a third party.”).

The issue of mail rerouting has come up in a few bankruptcy cases. However, the rights and powers of a bankruptcy trustee, especially in Chapter 7, are different for those of a receiver, and vastly different from a receiver in aid of execution. Unlike a receiver in aid of execution, a bankruptcy trustee is empowered to “collect and reduce to money the property of the estate” 11 U.S.C. § 704(a)(1). Property of the estate is defined extremely broadly and includes, with certain exceptions, “all interests of the debtor and the debtor’s spouse in community property as of the commencement of the case …” 11 U.S.C. §541(a)(2). A debtor is required to cooperate with the trustee and to surrender to the trustee all property of the estate, including documents, records and papers relating to property of the estate 11 U.S.C. § 521. Even with these statutory rights and powers, a trustee is not permitted to simply redirect debtor’s mail. In In re Benny, 29 B.R. 754 (N.D. Cal. 1984), a trustee redirected the debtor’s mail by submitting a change of address to the post office. The district court held this was improper. “However, a trustee’s right to receive the mail does not necessarily include the right to redirect the bankrupt’s mail–both business and personal, or either–without notice to the bankrupt and opportunity to object. Section 542(e), supra, appears to recognize that books, records and papers–including, assumedly, mail–may contain private or privileged matter whose disclosure should not be unnecessarily mandated and therefore provides for judicial oversight of the production. … We should not lightly infer that a trustee may legitimately circumvent the salutary requirements of section 542(e) by an expedient which is nowhere explicitly authorized by law, particularly when such an inference runs counter to fundamental principles long cherished by the citizenry.” Id. at 761.

The court not only cited the mail tampering provisions, supra, but also held the redirection practice threatens “significant privacy interests as recognized under both state and federal law,” Id. at 764, including, the First and Fourth Amendments and the privacy provisions of the California constitution. Cal. Court Art. I, §1. It concluded that if a trustee wanted to redirect a debtor’s mail he or she was required to provide advance notice to the debtor and an opportunity to object. It further held that if the debtor objected, a neutral third party or worker should be appointed to review the mail, segregate privileged and personal mail, and determine what mail the trustee should be entitled to. Accord, In re Crabtree; 37 B.R. 426 (Bankr. E.D. Tenn. 1984), where the trustee gave the debtor notice and an opportunity to object to the trustee redirecting the mail by filing a complaint for turnover pursuant to 11 U.S.C. § 521 and § 542(e). The court held that in order to safeguard the debtor’s constitutional rights, a disinterested third party had to be appointed to review and distribute the mail.