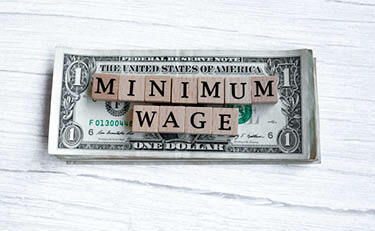 What goes up does not come down! The trend of increasing the minimum wage continues in 2023 as follows:

On January 1, 2023, the California state minimum wage will increase to $15.50 per hour for employers of all sizes. The state minimum wage also governs the exempt employee threshold salary, which will increase accordingly.  On January 1, 2023, the new minimum salary for employees who otherwise qualify to be exempt from overtime will be $64,480 annually for employers of all sizes.

Additionally, several California municipalities will raise their minimum wage rates on July 1, 2023. Employers should take care to note these changes because the pace of minimum wage increases in these locations will surpass increases required by the State of California in the race to reach the highest minimum wage.

Employers should also be aware of industry specific wages rates set by local ordinances. For example, hotels in West Hollywood are required to raise their minimum wage from the current $18.35 per hour to $18.86 per hour on July 1, 2023. For hotels with 60 or more rooms in the City of Los Angeles, the minimum wage of $17.64 per hour increased to $18.86 per hour on August 12, 2022. Currently, for hotels, and in 2023, for all other businesses, annual increases will be tied to the Consumer Price Index and announced by the city each year by no later than April 1st with changes to take place on July 1st.

Covered contracts that are entered into on or after January 30, 2022, or that are renewed or extended (pursuant to an option or otherwise) on or after January 30, 2022, will be generally subject to a higher minimum wage, which is currently $15 per hour and will increase to $16.20 per hour on January 1, 2023, in accordance with President Biden’s Executive Order 14026.

Beginning January 1, 2023, tipped employees performing work on or in connection with such covered federal contracts generally must be paid a cash wage of at least $13.75 per hour.