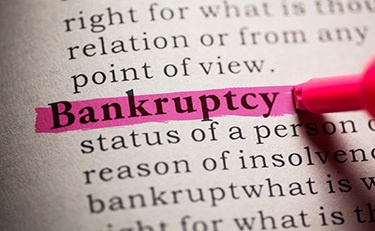 Stern V. Marshall attracted media attention because the debtor, Vicky Lynn Marshall, was also known as Anna Nicole Smith. Vicky failed her freshman year of high school, dropped out and went to work at Jim’s Krispy Fried Chicken, where she married the 16 year old cook (she was 17). She later divorced him, went on to work at Walmart and Red Lobster before becoming a stripper and then a Playboy model and meeting at her stripper gig – oil tycoon, J. Howard Marshall, who she married when she was 26 – he was 89.

Marshall lavished gifts and significant sums of money on her before and during their marriage. However, he did not include anything for her in his will. Before he died, Vicky filed suit in a Texas probate court claiming that Howard’s younger son, Pierce Marshall, had fraudulently induced his father into signing a living trust that did not include her. She maintained that Howard meant to leave her half of his estate. Pierce denied any wrongful conduct and defended the trust, and after his father’s death, the will. Soon after Howard died Vicky filed bankruptcy in the Central District of California. Pierce filed a proof of claim alleging that Vicky had defamed him when attorneys representing Vicky told members of the press that Pierce had engaged in forgery, fraud and overreaching.

Vicky asserted truth as a defense to Pierce’s claim and filed counterclaims that Pierce had tortuously interfered with the gift she had expected. She also contended Pierce essentially imprisoned Howard against his wishes, made misrepresentations to him and transferred property against his wishes.

The bankruptcy court granted summary judgment in favor of Vicky on Pierce’s claim and, after trial on the merits, entered judgment for Vicky on her tortious interference counterclaim, awarding her compensatory damages of $449 million and $25 million in punitive damages. Pierce appealed to the district court, which concluded that the bankruptcy court lacked authority to issue a final judgment on Vicky’s counterclaim and said it would treat the bankruptcy court’s judgment as “proposed rather than final” and engaged in an independent review of the record; much like a district court might handle a magistrate’s findings.

However, after the bankruptcy court’s decision, but prior to the district court’s decision, the Texas probate court conducted a jury trial and ruled in favor of Pierce. The district court did not give any preclusive effect to that decision. It agreed with the bankruptcy court that Pierce had tortuously interfered with Vicky’s inheritance, but reduced the damages to $88 million divided equally between compensatory and punitive. The case was appealed to the Ninth Circuit and then to the Supreme Court.

The second question was: can bankruptcy courts issue final judgments with the consent of the parties, either intentional consent or unintentional consents; that is, where a party submits itself to the bankruptcy court’s jurisdiction by, for example, filing a proof of claim or appearing in the case. That was the issue before the Court earlier this year in In re Bellingham Insurance Agency (“Bellingham”) ___ U.S. ___, 134 S. Ct. 2165 (2014), a case from the Ninth Circuit. This issue is very important because if the bankruptcy court cannot issue final judgments on state law claims with the consent of the parties, or fraudulent transfer or preference claims, then the district courts might need to do so, and possibly the bankruptcy appellate panel might not have authority to decide appeals as well. If that was the ruling, the work load increase for the district courts would be dramatic, as would the slowdown of the resolution of bankruptcy cases.

After Stern the circuits split on whether parties could consent to bankruptcy court jurisdiction on state law claims, with a number of circuits holding they could not including the Fifth, Sixth and Seventh. The Ninth Circuit came to the opposite conclusion in Bellingham holding implied consent was sufficient. Bellingham involved a fraudulent transfer action against a non-claimant to the bankruptcy estate. The trustee filed a summary judgment motion that was granted. The Ninth Circuit held the defendant had consented to bankruptcy court jurisdiction because it failed to timely object, participated in the case and only raised the jurisdiction issue on appeal.

Courts also disagreed about whether the bankruptcy court could issue findings of fact and conclusions of law subject to denovo review by the district court, as the district court did in Stern. The Ninth Circuit in Bellingham stated that it can, however, other courts around the country disagreed.

In deciding the Bellingham case the Supreme Court dodged the main issue, as it sometimes wont to do, and affirmed on other grounds. The Court held that when faced with Stern claims, bankruptcy courts are not barred from taking any action, as some courts had held, but may enter proposed findings of fact and conclusions of law for de novo review by the district court, which is what happened in Bellingham. The Court left unanswered the key question in Bellingham, whether bankruptcy courts can enter final judgments in cases that would otherwise require an Article III court if the parties consent and, if so, whether express consent is required or whether consent can be implied. The Court has, however, agreed to consider those questions once more this term in Wellness International Network v. Sharif.

Interestingly, last August in a case called Mastro v. Rigby __F.3rd. ___, 2014 WL 4115946 (9th Cir.) the Ninth Circuit held that because the Supreme Court affirmed their decision in Bellingham. Bellingham is good law and “a bankruptcy court may constitutionally enter a final judgment on a Stern claim against a non-claimant to the bankruptcy estate with the consent of the parties”.